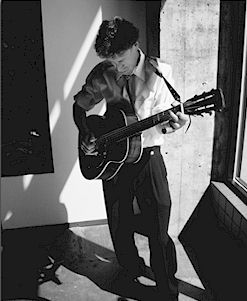 Evolution of the Blues is a presentation sponsored in part by the Nevada Arts Council and the National Endowment for the Arts American Masterpieces: Three Centuries of Artistic Genius

From its earliest roots to contemporary musical fusion, the Blues is the common thread in American music. Drawing from a vast repertoire of music played on a variety of traditional instruments, Colin Ross puts on an unforgettable show.

The show traces the history of the blues through an astonishing variety of styles. Whether it is energetic old time stride and boogie, the harmonic complexity of Billy Strayhorn and Duke Ellington, the gentle roll of Mississippi John Hurt, or the driving sting of Muddy Waters, the music is played with uncompromising technique, integrity, and soul.

Reno based composer and multi-instrumentalist Colin Ross plays a large and ever-shifting repertoire of original music, jazz standards and blues classics. Beginning with classical piano at the age of five, Colin has continued to study and grow throughout his career, playing a variety of instruments and styles. While maintaining a full time performance schedule, Colin has recorded and released five CDs on his own label, Oharaross Productions. Colin’s band features piano, electric, acoustic, 12-string and slide guitars, bass, drums, percussion, vocal harmonies, winds, and various folk and electronic instruments.

$10 Tickets are ON SALE NOW at The Martin Hotel and Nature’s Corner.

Here is a brief video of the “Evolution of the Blues Show” at the Brewery Arts Center in Carson City.