One reviewer recently tried to capture the essence of Chris Proctor’s music: “What to call his unique melange of styles? There’s an aspect of Americana in the echoes of Appalachian and old-timey styles that are apparent in just about every track, but there are also elements of jazz, Celtic folk, and a dash of blues in here somewhere. What Proctor does is create guitar music that reflects the whole heritage of the instrument and still has his own distinct stamp — a tall order, but he’s up to the job” 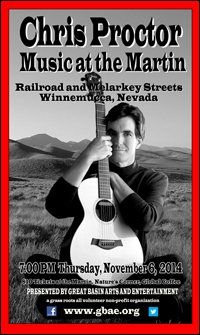 These luminous and diverse quotes reveal the breadth and depth of Chris Proctor’s music- his solo, 6 and 12-string  guitar concerts and recordings. Two additional comments typify the first-time listener’s reaction: “Wow- I didn’t know that acoustic guitars could sound like that,” and, ” It seems as if there are three guitarists up there on stage, not just one.”

Ten CDs on Flying Fish, Windham Hill, Rounder and Sugarhouse Records, his victory in the US National Fingerstyle Championship, his books, DVD’s, videos, magazine articles, and endorsements all testify to Chris’s standing as one of the elite solo guitar composers, arrangers, and performers of the day.