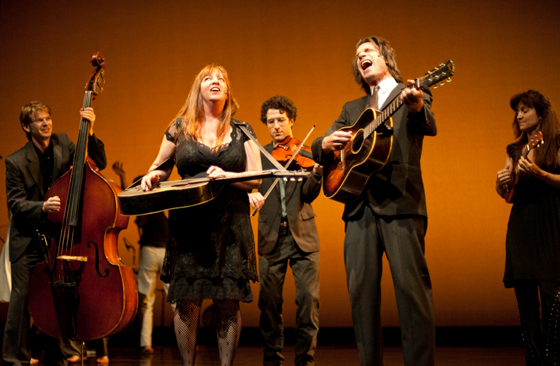 Performing driving dance tunes and haunting ballads with an amazing array of vintage and eclectic instruments, The Crooked Jades are modern innovators in the old-time Americana world, creating a cinematic sound based on Americana roots infused with the diverse musical influences of Europe and Africa.On a mission to reinvent old world music, they bring their soulful performances (brilliantly suprising arrangements of obscure old tunes mixed with beautiful original compositions) to clubs, concert halls and festivals around the united States and Europe.

Based in San Francisco, founded by leader Jeff Kazor and nurtured by the vibrant West coast, California and Ba Area bluegrass and old-time music scenes, the Crooked Jades play with a thrilling and hyponotic energy which has inspired director Sean Penn to include a turn from World’s on Fire ih his most recent film Into the Wild, fans on their feet dancing and critics comparing them to everyone from the New Lost City Ramblers and The Pouges to Nick Cave, Tom Waits, and Gillian Welch.