Step back into the 1880’s and listen to the music that cowboys were really playing and singing and you may be surprised to hear a diverse and multicultural mix of blues, Irish fiddle melodies, African beats, gospel, old-timey, minstrel, and popular uptown parlor music. This is exactly the experience that an evening with the Gillette Brothers provides. Guy and Pipp Gillette are working to both entertain and educate their audiences about real life and the real people that populated old West. When the music is combined with some yodeling, bones playing, story telling, and medicine show barking, you will be both amazed and amused.

Guy plays the fiddle, banjo, guitar and the bones. Pipp plays the guitar, banjo, harmonica, tambourine and an Irish drum call the bodhron. On top of that, they both have beautiful, strong, and compelling singing voices. 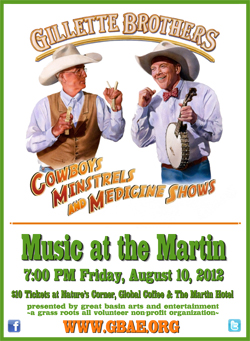 The Gillette Brothers run The Camp St. Cafe & Store in Crockett, Texas a live music venue, much like the Martin Hotel, that has featured some of the top performers in the country. They live on the ranch that their grandfather established in 1912 in Lovelady Texas, a ranch that has a collection of buildings that have often been compared to the National Ranching Hertage Center in Lubbock Texas.