Guy and Pipp Gillette are on their way to the Cowboy Poetry Festival in Monterey California, from their home in Crockett Texas, and they are going to make a stop for a show in Winnemucca on December 8.

The last time the Guy and Pipp Gillette were at the Martin they shared the stage with Don Edwards and Pop Warner, but this time they will have the place to themselves.  They perform a mix of traditional cowboy songs, and songs reflecting the celtic roots, country blues, minstrel and medicine show songs that influenced cowboy music.  For me it is always worth the price of admission just to watch and hear Guy play the rhythm bones, musical bones they make from cow ribs. 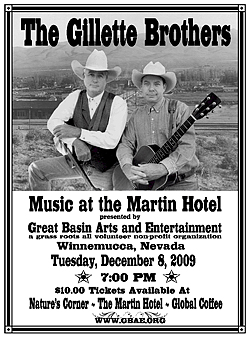