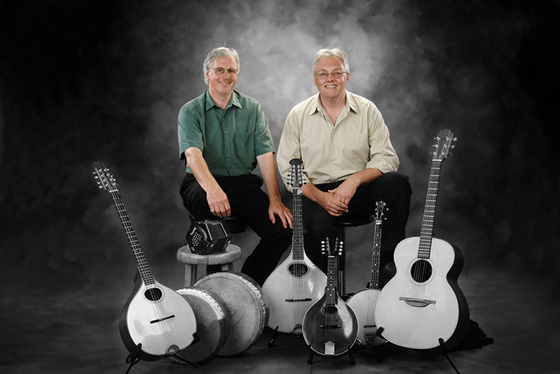 The folk duo, Men of Worth, who position themselves firmly at the extreme, traditional end of the Celtic music spectrum, will perform at the Martin Hotel on Saturday, February 28.

“Our music has its history in the crofting life of my Hebridean homeland and James’ western Ireland. It was a part of the fabric of everyday life and it came to America with the immigrants a century ago”, explained Macdonald. “Now, we’re playing it again, to audiences for whom it could only be a generational memory”.
“For us, the irony is we were brought up in Scotland and Ireland, and as boys we listened most eagerly to the music of America, and not especially to the music of own areas. On our radios, we heard Hank Williams Sr. and Jim Reeves. We wanted to see the Arkansas River, not Loch Lomond, and Reeves’ hometown of Carthage, in east Texas, had more romance for me than did the Isle of Lewis”. “Joni Mitchell, Neil Young and Crosby, Stills and Nash influenced me greatly”, admitted Keigher, who as a teen was already performing his own songs in the Irish pubs where he learned his wit and humor. “But now I have returned to my own musical bloodlines, too.”

If you can’t make that journey, you can hear the music when these talented troubadours bring it to you, February 28.