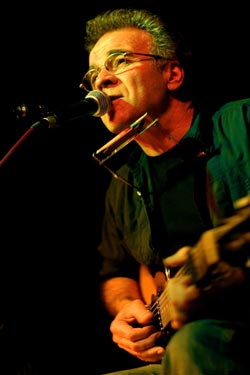 $15 TICKETS ARE ON SALE NOW AT THE MARTIN HOTEL, NATURE’S CORNER, AND GLOBAL COFFEE.

Ray Bonneville is a roaming blues poet, inspired by the road and the many other places he has called home—New Orleans, Colorado, Arkansas, Alaska, Boston, Seattle and Paris, France.  Born in Canada and raised in the United States, Bonneville has lived all over.  No place, however, has been more influential than New Orleans.

In the streets and clubs of New Orleans, Bonneville soaked up the prevalent take-your-time attitude that ran through the music being played there.  “There’s something about the heat and humidity that makes people slow down,” he says.  “New Orleans is where I learned to take my time, to allow space between the notes so the songs could truly groove.”  That groove is at the core of Bonneville’s sound.  A one-man band, he backs up weathered, storytelling vocals with a highly percussive guitar style, dramatic harmonica lines and a foot that keeps the rock steady beat.  The result is a big sound with an almost primitive quality.  It’s visceral, raw music.

Like the great American writers of the south and his favorite authors Cormac McCarthy and Flannery O’Connor, Bonneville is inspired by the places he has been and the unusual people he has met throughout his travels.  His songs are like short stories, evoking true-to-life characters that stumble their way through a rough and tumble world of violence, hope and despair.  Heavily influenced by the natural world, Bonneville finds himself splitting his time these days between Montreal, Austin and Cotter, Arkansas, where he likes to write songs and fly-fish the White River.

Honing his craft for the last 30 years, Bonneville’s gritty storytelling and deep-grooving blues style has won him much critical attention.  In 1999, Ray won the prestigious Juno Award (Canadian Grammy) for his third album Gust of Wind.  His fourth release, Rough Luck, was also nominated for the coveted award.  With his 2004 Red House debut Roll It Down, Ray made himself a name in blues and roots music circles, garnering rave reviews from DownBeat and No Depression.  He has toured all over the world, sharing the bill with such blues legends as B.B. King, Muddy Waters, J.J. Cale and Robert Cray and in 2007 wowed the music industry with his bring-down-the-house performances at the South By Southwest and Folk Alliance conference.  A world-class guitarist, harmonica player and hard-hitting songwriter, it is no wonder that Ray has received rave reviews from blues, jazz and roots critics alike and can count among his fans such artists as Chris Smither and Ray Wylie Hubbard.  For more information about Ray Bonneville, please visit his website at www.raybonneville.com.