$10 Tickets are On Sale Now at the Martin Hotel, Nature’s Corner, and Global Coffee. You can also buy them online at: TheMartinHotel.Com 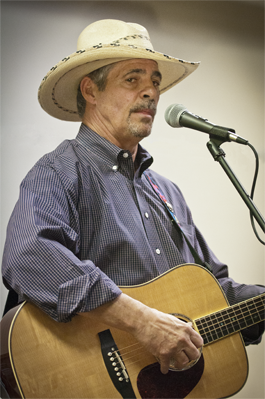 Dayton, Nevada, western singer, songwriter, and guitar player Richard Elloyan will appear at the Martin at 7:00 PM on Saturday, March 29. Richard’s musical inspiration is the Great Basin, the landscape of Nevada, and the lifestyle of the buckaroo.  This year, during Nevada’s  Sesquicentennial, the 150th anniversary of Nevada’s admission to the Union, Richard has a special focus on songs about Nevada.  His latest record release, “Come Back Home” carries the tagline “Song of the Silver State”.   All of the songs but one are penned by Richard, and carry titles such as Eureka Saturday Night, Nye County Drifter, Alkali Rose and Big Nevada Sky.

Richard’s rich baritone voice beautifully carries these songs about sage brush, big skies, lonely places, long drives, and exciting nights in town, told from the perspective of a man that has traveled over the length and breadth of the state drinking in the rugged beauty, appreciating the hard edged landscape, and soaking up tales of the characters that make up its history.

Though he has his degree in range management from UNR and pitched in to help mend fences when his friend became cow boss of the Flying M Ranch in Yerington, Elloyan firmly states he’s “not a cowboy but a good observer.” His love of the land and telling stories is drawn from growing up surrounded by the open landscape and colorful history of Virginia City.

After an enlistment in the Navy, Richard pursued his passion for the land by attending the University of Nevada at Reno and receiving a degree in Range Management.  Working for the Bureau of Land Management and the U.S. Forest  Service, Richard was able to work some of the most beautiful land in the country.  In his current position as an Environmental Health Specialist Richard travels the rural roads of Nevada and gathers inspiration down every road and over every rise.