Voice and guitar blend harkens back to old-time county roots. 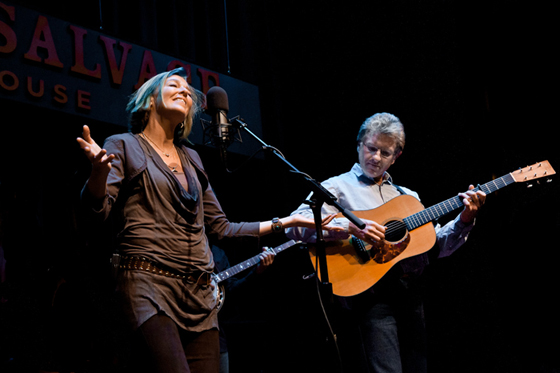 Alongside her own original material, Nell Robinson and Jim Nunally cover music ranging from Bill Monroe to Nine Inch Nails.

Nell Robinson hadn’t sung in public since elementary school until the itch struck in 2007. She has traveled a long way since then, and from her family’s small roots in “loser” Alabama, where several generations of Robinsons lived. Nell’s sweet childhood memories embrace visiting the local store that sold bottled cokes and boiled peanuts, pickling blueberries and shelling peas with her grandmothers, Nell Robinson and Thelma Bates. Raised by a career Air Force father, she and her family moved every few years, and the Alabama farmhouse and local roads were one of very few places where she was recognized and where almost every house along the road had “kinfolk” in it.

Nell’s debut CD, “Nell Robinson in Loango”, made national bluegrass and Americana charts throughout the country and she was quickly snapped up by Garrison Keillor’s “A Prairie Home Companion and the Strawberry Music Festival.

Jim Nunally is a world-class guitarist, vocalist and songwriter, and has toured extensively with the David Grisman Bluegrass Experience and with John Rieschman and the Blue Jays. He is the recipient of two Grammy Award certificates and two IBMA awards. He is also a two time Western Open Masterpicking Champion and Guitar Champion. His most recent CD, “Gloria’s Waltz”, showcases his distinctive pickin’ and singing.