$15 Tickets are On Sale Now at the Martin Hotel, Nature’s Corner, and Global Coffee. You can also buy them online at: TheMartinHotel.Com 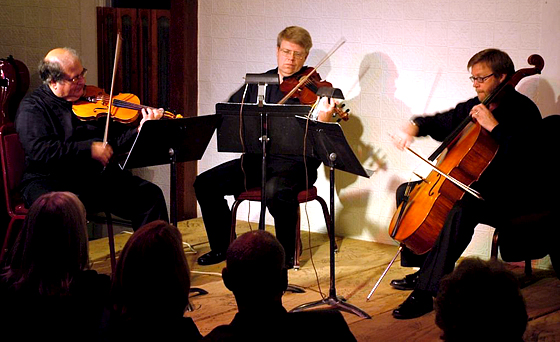 The College of Idaho Langroise Trio will return for their fourth concert at the Martin on Saturday, May 3, 2014.  These superb musicians have proven to be among Winnemucca’s favorites during their sold out performances in 2006, 2008, 2011 and 2012.

It turns out that this nearly 250 year old art form has found its roots in the small informal setting of the Martin.  Chamber music, often referred to as “the music of friends”, works so well in the back room of the Martin, with its intimate surroundings and wonderful sound, that it has become a favorite of the Langroise Trio as well.  Violinist Geoffrey Trabichoff remarked after the 2006 performance that ” “We love playing in your intimate venue, where the excellent acoustic is exceeded only by the warmth of the audience.”