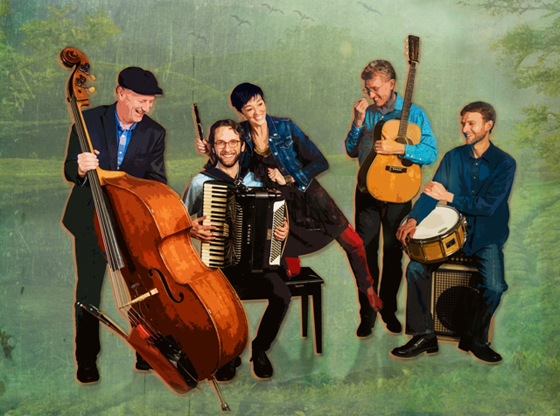 Blending country, jazz, folk, and bluegrass music with a great lineup of musicians, Nell Robinson & Jim Nunally’s Band brings original tunes and classic gems to Music at the Martin. They are old friends and we look forward to their return. Please join us. 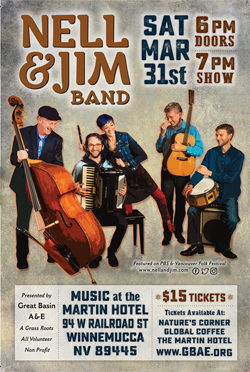 “Nell Robinson and Jim Nunally love the road, and they revel in the adventure of uncovering new corners of this old world that people call home.” — NO DEPRESSION

Nell Robinson has been described as one of the freshest voices in roots music. Jim Nunally is a San Francisco Bay Area-native, a musician, composer, record producer, and teacher. Jim joins master American guitarists Doc Watson and Tony Rice as one of the finest interpreters and performers of bluegrass and traditional music. Jim Kerwin is considered simply one of the best string bass players in the country. Playing with David Grisman for over 30 years, he is featured on all of Grisman’s Jerry Garcia recordings. Jon Arkin is a versatile, gifted percussionist who is known for his performances & recorded work in a wide variety of musical contexts. He has performed with jazz greats such as Lee Konitz, Gene Perla, and Ira Sullivan. Renowned San Francisco musician and accordion player Rob Reich joined the band in 2017 and is best known for his work with Tin Hat, Gaucho, and Circus Bella. This is truly an all-star band!