Purchase your $10 tickets Now! On-line from The Martin Hotel Tickets are also available at our walkup outlets, The Martin Hotel, Nature’s Corner and Global Coffee in Winnemucca. 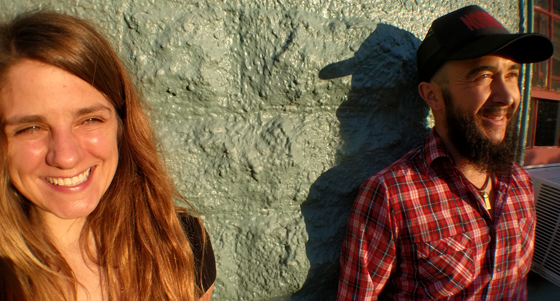 We met Thomas Deakin  in March of 2016 when he appeared at the Martin as part of the wonderfully odd duo Deakin Hicks, with his buddy and mystical music man Lucas Hicks. We had a very small audience that night that experienced this Chromatic Button Accordion and Clarinet duo perform “original compositions and improvisations twisted together in a unique blend of tone, time, and delight”. Do check it out. They sat down on two five gallon plastic buckets, we drew the seats of up close, and we all enjoyed one of the best and most unusual concerts ever featured at the Martin. Sadly Lucas Hicks lost his 14 year battle against cancer last October, Thomas lost his musical partner, and Deakin Hicks was lost to the world.

Thomas Deakin has now joined up with New Orleans based avant-garde jazz keyboardist and singer Stephanie Nilles and we suspect that something highly interesting is going to happen when this duo hits the back room at the Martin.  Just give this video a listen, and imagine Mr. Deakin’s clarinet, saxophone, or trumpet, wrapped in and around Ms. Nilles in place of the bass.

Chicago-born jazz/punk/barrelhouse musician Stephanie Nilles has been doin’ Kesey proud one bar at a time since 2008, hustling around the United States, Europe, and Canada (except from 2009-2010 for legal reasons), averaging 150 gigs a year, and captivating unsuspecting listeners with a voice that would make Jelly Roll Morton look orthodox and Ma Rainey look sober. 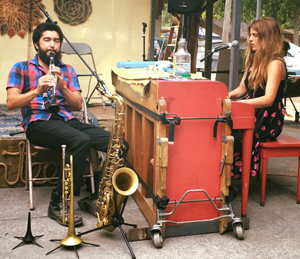 Having studied piano and cello since the age of six, she was a finalist at the Young Concert Artists’ International Competition, a gold medalist at the Fischoff Competition, and had performed on NPR on three occasions by the age of seventeen. At twenty-two, she had graduated from the Cleveland Institute of Music with a degree in classical piano performance and temporarily relocated to New York City, where she began writing songs and performed regularly on the east village anti-folk scene while making a living working odd jobs as a dog walker, valet parking attendant, Italian coffee bar barista, ghostwriter, and research assistant to a blind bioethicist at an all boys’ Jewish university.

She has since sung with Bobby McFerrin in Carnegie Hall, directed the musical program of a Brooklyn burlesque series, covered Busta Rhymes’ “Break Ya Neck” in the skeletal remains of a bombed-out cathedral in Nuremberg, been invited to perform official showcases at SXSW and International Folk Alliance, and self-released 5 full-length albums, three of which were picked up for European release by German roots/blues label Tradition und Moderne (Taj Mahal, John Fahey).

When Stephanie’s not sleeping in her car, she lives in New Orleans, which might not be the best idea.

You may have seen and heard local band L.N.O.Y. during the last couple of years, somewhere playing background music. Maybe it was at the Chamber of Commerce Wine Tasting, at a Cruise night downtown or posted somewhere along the way during a Wine Walk/Margarita Walk night in Winnemucca. Then again, you may have experienced L.N.O.Y in one of it’s many other forms, in some guy’s garage late one night when you didn’t feel like going home just yet, and some people you knew we’re gonna drop in on a party at a friend’s house.  In one form or another, L.N.O.Y. has been lurking around Winnemucca for years.

L.N.O.Y. has just finished the recording of their fifth record, and so to celebrate, we are going to put them front and center, as the main attraction, for Music at the Martin on Friday, May 30.

Jerry, JR, and Kirk, have been kicking around Winnemucca for their entire lives.  They grew up on the edges of respectability, seeking a more defiant, rebellious attitude toward the world.  Bands like Black Flag, Bad Religion, and Social Distortion provided the sound track for their youth, and this on-the-edge influence shows up in their own music.  Somewhere along the way they have discovered that the narratives and imagery of traditional music, folk music, what these days is called Americana music, fits well with the stories they have to tell. So they have more or less moved on from their punk rock roots, and have taken up playing acoustic.  We think you might be surprised by the result. 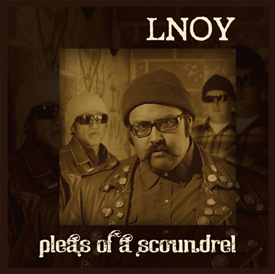 Autographed copies L.N.O.Y. ‘s  “Pleas of a Scoundrel” will be available for purchase at the show!