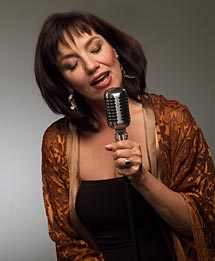 CeCe Gable, the Chanteuse of the Sierra, makes her triumphant return to Winnemucca’s famed Martin Hotel on October 8, 2011 at 7:00 p.m. Last year’s performance was “over the top” with great jazz stylings by Ms. Gable and her band.

This is a show you won’t want to miss with world-class jazz musicians:

This is sure to be an exciting evening of music for everyone who loves the timeless songs of the Great American Songbook, the Beatles, straight ahead jazz and some obscure cabaret tunes.

“Gable is a Reno and Northern Nevada treasure. A fine musician, a charming host for an evening of song from the Great American Songbook, this chic lady brings glamor to her work and a no-frills approach to lyrics and musical line that gives each song it’s very own moment supreme.” – Jack Neal

“CeCe is a storyteller. Her earlier studies in dance have clearly found their way into her approach to the song and jazz music, for she, like the dancer, attempts to get inside the sound in order to discover what the sound has to say…” – L. Martina Young

She has presented the works of George Gershwin, Thelonious Monk, Stephen Sondheim and Kurt Weill to rave reviews in a variety of venues. According to Metroland (Albany, NY), CeCe Gable is a performer who exudes warmth, sophistication, a generous stage presence and rare versatility. A unique, compelling performer with a style and sound all her own, CeCe has been compared to the song stylists of the ’50?s with a contemporary twist.

TICKETS ARE ON SALE NOW

Tickets are available for $15.00 at the Martin Hotel, Nature’s Corner, and Global Coffee. You can also buy them on-line at http://themartinhotel.com