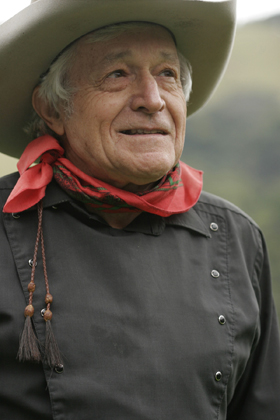 Ramblin’ Jack Elliott is going to make another visit to the Martin Hotel in Winnemucca.   We’re thrilled to have one of the most mythical characters in American music visit our cozy little venue for the third time.

Jack Elliott set off sparks in London when he traveled there in 1955.   The young musicians in England were just starting to investigate American blues and traditional country music.   Into their midst fell an guitar playing cowboy.   Jack showed up in this world of proper gentlemen in his boots, his jeans, and wearing his Stetson.   He could play flawlessly in the styles they had only heard but never seen.   Jack’s time in England and Europe helped prime the British Invasion that shows up on our shores 10 years later…

“His tone of voice is sharp, focused and piercing.  All that and he plays the guitar effortlessly in a fluid flat-picking perfected style.  He was a brilliant entertainer…. Most folk musicians waited for you to come to them.  Jack went out and grabbed you….. Jack was King of the Folksingers.” – Bob Dylan, Chronicles: Volume One 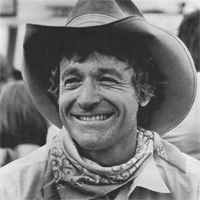 At eighty, Ramblin’ Jack is still on the road, still seeking those people, places, songs and stories that are hand-crafted, wreaking of wood and canvas, cowhide and forged metal. You’ll find him in the sleek lines of a long haul semi-truck, in the rigging of an old sailing ship, in the smell of a fine leather saddle.

BETTER YET, FIND HIM AT THE MARTIN HOTEL IN WINNEMUCCA ON JANUARY 31.