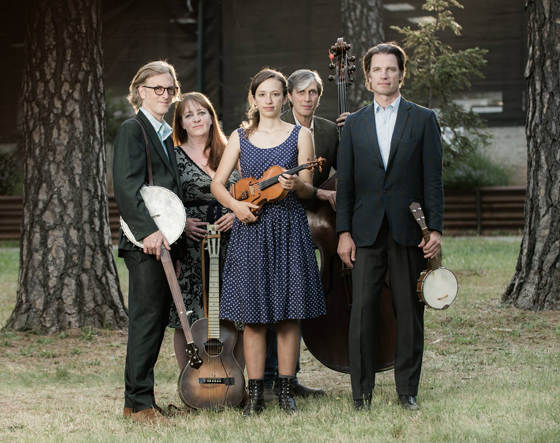 “The Jades, in other words, aren’t playing your grandparents’ old-time music. Nor are they performing the stylized stringband music that our revivalist contemporaries adapted four or five decades ago and take to festival stages and recordings into the present moment. This is sepia tones, bent angles, unexpected accents, unanticipated sounds. It’s banjo ukuleles, minstrel banjos, plucked fiddles, bowed basses, Hawaiian slide guitars, harmoniums, Vietnamese jaw harps, pianos played clawhammer-style. It is the familiar embraced by the strange. It is the antique and the modern, in a distinctly idiosyncratic meaning of each. This is a music that feels at once fiercely inside time yet also above and around it. And all of this is accomplished without a hint of rock, electronica, or the other flourishes to which less imaginative folk bands turn when they think they’ve exhausted the language of tradition. Tradition, the Jades insist, speaks in a host of tongues. If you know what you’re doing, you can speak in as many as you’d like, sometimes at once.” – Sing Out

Performing driving dance tunes and haunting ballads with an amazing array of vintage and eclectic instruments, The Crooked Jades are modern innovators in the old-time Americana world, creating a cinematic sound based on Americana roots infused with the diverse musical influences of Europe and Africa.On a mission to reinvent old world music, they bring their soulful performances (brilliantly suprising arrangements of obscure old tunes mixed with beautiful original compositions) to clubs, concert halls and festivals around the United States and Europe. 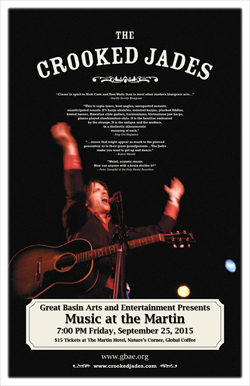 Based in San Francisco, founded by leader Jeff Kazor and nurtured by the vibrant West coast, California and Bay Area bluegrass and old-time music scenes, the Crooked Jades play with a thrilling and hyponotic energy which has inspired director Sean Penn to include a turn from World’s on Fire in his most recent film Into the Wild, fans on their feet dancing and critics comparing them to everyone from the New Lost City Ramblers and The Pouges to Nick Cave, Tom Waits, and Gillian Welch.