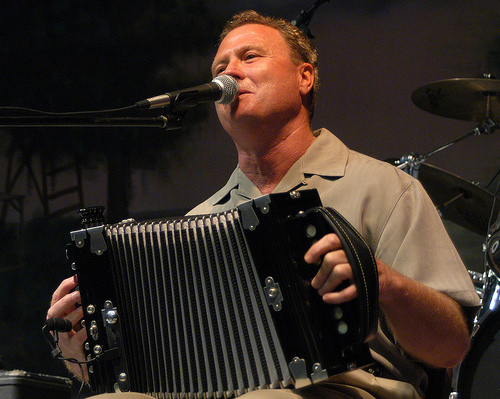 Ray Abshire is one of Cajun music’s purest accordionists and vocalists and a living link to it’s very roots. A member of one of Louisiana’s legendary musical families, Ray grew up surrounded by Cajun music’s pioneer artists. He has performed with most all of the old masters whose recordings now form the texts for students of today. In 1975, while at the pinnacle of Cajun music as accordionist with the legendary “Balfa Brothers Band” and helping to open windows for Cajun music in the nation’s musical consciousness, Ray left the bandstand. Abshire’s return to the stage has been hailed by both critics and fans alike. He is once again at the forefront and sharing his knowledge and skills with a new generation.

Recognized as a master musician and one of the resurgence leaders of Cajun music, Ray now enjoys conducting workshops, teaching at music camps and performing at major festivals both nationally and abroad. Ray’s music is unfiltered and has it’s own wholesome electricity. He plays it the way it was handed down to him and understands the importance of preserving one of this nation’s great “folk” musics. Each and every time you attend a Ray Abshire performance you are guaranteed the “real deal”!