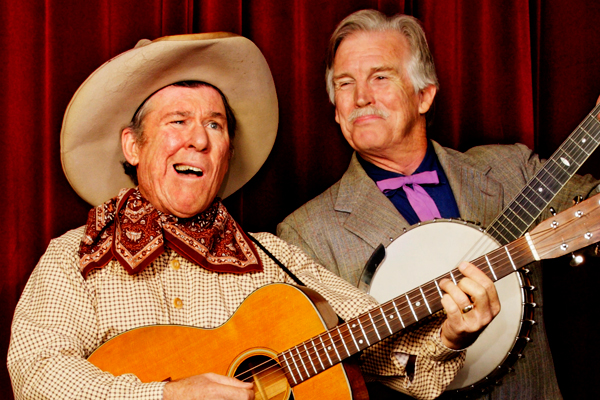 During the Winnemucca Ranch Hand Rodeo

Whether capturing the haunting refrain of a Jimmie Rodgers blue yodel or swinging out a hot novelty number, everyone gets caught up in the fun these two cut-ups have on stage. Long time fans will remember them as founding members of two of California’s favorite acoustic combo’s, “8th Avenue String Band” and “R. Crumb’s Cheap Suit Serenaders.” Between them they share a provocative array of period instruments including: flat-top guitar, national steel, baritone and soprano ukulele, musical saw, accordion, six-string banjo and harmonica.

“Much more invigorating than 9/10ths of the stuff you hear from the current cadre of Western revivalists.” – Ronald Lankford, Jr., Sing Out! magazine

Swingin’ tunes! Cowboy crooning! Award winning yodeling! Timeless humor! Yes folks, all this and more can be yours at the only show on the planet where you can witness a man in a ten gallon hat, yodel, play accordion, dance a jig and twirl a lariat – all at the same time.

Sagebrush artist, Sourdough Slim, transport us to a whimsical, infectious world where vaudevillian camp and cowboy lore intermingle. With a repertoire of classic western songs and an exuberant, animated, crowd pleasing delivery, Sourdough Slim has become one of the most popular cowboy entertainers of our time.

The East Bay Express calls him “The most entertaining cowboy singer-yodeler-accordionist extant.” The Allentown Morning Call proclaims him to be a “One-man Western extravaganza!” And the music director at the Carnegie Hall Folk Festival commented, “Spectacular! His ability to entertain, charm and educate a New York audience was nothing short of amazing.” From the moment this accordion squeezin’ Will Rogers swaggers on stage, it’s apparent to everyone that they’re in for a rollicking good time.

A well traveled veteran of stages ranging from The National Cowboy Gathering in Elko, Nevada to the Lincoln Center’s recent Roots of American Music Festival, Slim provides accordion, guitar, harmonica and a generous helping of the truly astounding yippie-ti-yi style that won him the 2001 Will Rogers Award for Yodeler of the Year. His national appearances have justly earned him a loyal following of fun loving fans.

Born in Hollywood, California, Rick Crowder spent much of his childhood on a family cattle ranch in the Sierra foothills. But as he explains, “my true calling as a cowboy was not on the range but rather, on the stage.” A childhood cut-up, he developed his comic character, honed his musical and yodeling skills and garnered the nick name “Slim” while performing in several traveling western bands in the 1970’s and 80’s. Sourdough Slim emerged in 1988 when he came up with the idea to meld his experiences into a solo act based on a comical accordion playing yodeling cowhand. His seasoned gift for connecting with audiences from Los Angeles’ Autry Museum to The Kennedy Center is a true testament to the irrepressible talent and dedication of this unique entertainer.

Our favorite porch music, a Winnemucca tradition, and the best purveyor of cowboy music in America today. TICKETS ARE ON SALE NOW!

In what has become a tradition, Don Edwards will be at the Martin Hotel at 7:00 PM on Monday, January 26, for a performance before he moves on to Elko to join in the 25th Annual Cowboy Poetry Gathering. Folks at the Western Folklife Center in Elko told me yesterday they still have tickets to this great event and if you need one, rooms are still available at many motels in Elko.

Don represents the best of what Great Basin Arts and Entertainement is all about.  He is a truly great singer, guitar player, folklorist, storyteller,  engaging entertainer, and one of the finest gentlemen we have ever met.

This Grammy nominated singer-guitarist continues to build a legacy that enriches our vision of the American West. In tales of the day-to-day lives and emotions of those who have lived it, his ballads paint a sweeping landscape of both mind and heart, keeping alive the sights, sounds and feelings of this most American contribution to culture and art. The quality of this cowboy balladeer’s music stems from the fact that he is so much more than a singer. Bobby Weaver of the National Cowboy Hall of Fame in Oklahoma City, summed up Edwards’ importance as “… the best purveyor of cowboy music in America today.” END_OF_DOCUMENT_TOKEN_TO_BE_REPLACED