They’re Back! This time in a new spot, with ROOM TO MOVE and a place to get up and DANCE!

Last summer when we hosted Halden Wofford and the Hi*Beams they just about rocked the Martin down. This year, through a generous partnership with WINNER’S HOTEL and CASINO, we’re gonna present a late night show that could be the high light of the year, but we’re gonna need you there to make it happen! And, just like the shows we present at the Martin, all the money from your tickets will go to the band! So, when you step up and buy a ticket, or pay the cover at the door, remember you are helping to support a bunch of crazy wandering musicians that have traveled thousands of miles just to show you a good time!

The $10.00 tickets are on sale now at the WINNER’S GIFT SHOP, the Martin Hotel, Nature’s Corner, and Global Coffee. You can also buy them online at themartinhotel.com. 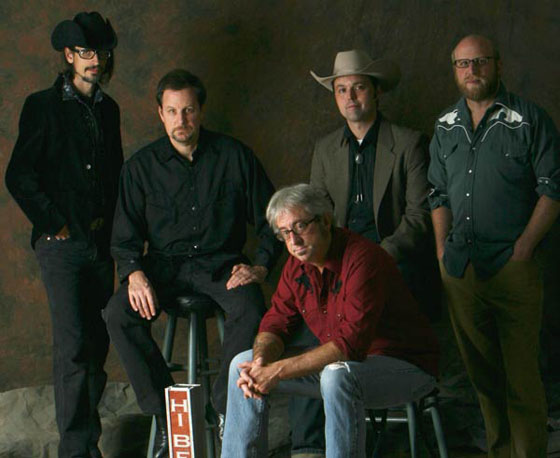 Halden Wofford & the Hi*Beams ride out from the cutting edge cowtown of Denver, Colorado. Rootsy and real, neither revivalist nor retro, the Hi-Beams brand of country music is as boundless and electrifying as America itself.

Equal parts Hank Williams and Johnny Depp, front man Halden Wofford pours forth a potent mix of rocked-up honky tonk, western swing, Dylanesque originals and spaghetti western epics. There is no creative limit to the songwriter, illustrator, author, storyteller and singer. But Halden has met his match in the Hi*Beams. Each outrageous tale he spins is met by the whine and wail of the steel guitar, the furious double-neck electric guitar and mandolin, and the relentless thump of the upright bass and drums.

From Red Rocks to rodeos, the Fillmore Auditorium to the back of a flatbed truck, Prairie Home Companion to performing arts centers, Halden Wofford & the Hi*Beams deliver an unforgettable and original night of American music.

Halden Wofford and the Hi-Beams’ throwback and stylish take on the honky tonk genre is a breath of fresh air amidst other wannabe retro acts. With some of the choicest players on the Front Range and a professionalism that is bar-none, the Hi-Beams landed themselves on the famed NPR show “A Prairie Home Companion” in recent years and Wofford’s distinct vocals continue to garner the band well-earned attention. – Marquee Magazine, Boulder, CO