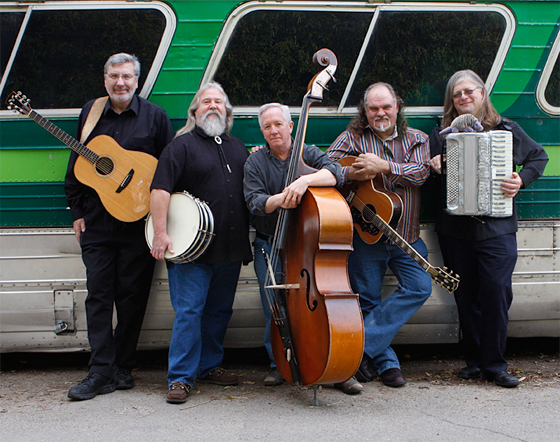 “As good as any singing and picking I’ve heard in my thirty years in the music business. Do your friends a big favor, and turn them on to this band!” – Bob Brown, Owner, Rancho Nicasio, and manager, Huey Lewis and the News

A big hit at every festival they’ve played, including Telluride, Sisters, American River, Mill Pond, Strawberry (where they were voted “best new discovery” and “best vocalist”).

Glenn Houston has received the “Best Guitarist” award for 2009 from the Northern California Bluegrass Society. He is an accomplished player with influences ranging from T-Bone Walker, Albert King, B.B. King and Michael Bloomfield to Doc Watson, Albert Lee and James Burton. A co-founder in 1979 of the group Hearts on Fire, Glenn was nominated for “Best Lead Guitar” by the California Country Music Association (CCMA). While Glenn was with the group, Hearts on Fire earned a prestigious Bay Area Music Award (Bammie). Over the years, Glenn has shared billing with Hank Williams, Jr., Merle Haggard, Waylon Jennings, Willie Nelson, Emmylou Harris, The David Grisman Quintet, Doc Watson, Earl Scruggs, John Hartford, Ricky Skaggs, The Nitty Gritty Dirt Band, and The Tubes. In recent years, he has performed live and in the recording studio with Grammy Award winner Ramblin’ Jack Elliott; he co-founded and played lead guitar for the critically acclaimed acoustic group The Waybacks; he has performed with blues legends Mark Naftalin and Nick Gravenites; and he has earned a second nomination for “Best Lead Guitar” from the CCMA. And yes, he plays left-handed upside down.

Travis Jones’ musical background and history reads like a William Faulkner novel. He began singing gospel music at age four with his mother Lottie Mae Adams, a blues singer who recorded several discs on Paula Records. Travis became known not only for his vocal abilities but also for his telling of old testament bible stories at revivals and tent meetings all across the south. He started his first group at sixteen – a Paul Revere and the Raiders tribute band. Travis served 6 years in the US Army; he was stationed in Europe where he performed with the soul and funk band Smoke, which eventually became the back up band for the famous R&B group The Manhattans (“Let’s Just Kiss and Say Goodbye”). Upon leaving the armed forces, Europe, and Smoke, Travis made his way to Northern California where he has resided since 1979.

During his time in California, he has performed with a wide array of artists. He’s shared the stage with Asleep at the Wheel and Waylon Jennings – Night Ranger and the Doobie Brothers – John Hartford and Levon Helm, just to name a few. He has recorded with various artists, as well as releasing two self titled albums – “Lost Highway, The Legendary Music of Hank Williams” and “Dance All Night” – along with five CD releases with Houston Jones. Travis lives in Alameda CA, on his sailboat, with Samson the wonderdog.

Rolling Stone Magazine described Peter Tucker as “one of the most creative percussionists to emerge in rock music.” Originally from Massachusetts, Peter’s eclectic pro career began in the early 60’s working with the Boston-based band The Monks featuring Brad Delp (who later became lead singer for the rock group Boston.) Peter also recorded in New York with Tim Hardin and worked with Richie Havens, Austin Delone, Grungy O’Muck and others. Peter has also worked with the ground-breaking rock band Guns and Butter, recording two albums on Atlantic Records. Later, on the West Coast, Peter played with the R&B band Pacific Gas and Electric and with Declan Mulligan and The Beau Brummels with whom he put out the Vince Welnick-produced single, “Back To Life.” Peter has continued to play folk, jazz, country, blues and rock with many Bay Area Bands such as Large and in the Way, The Ray Price Club, Celtic Scandal, The Ron Price Band, The Lost River Band, The Gary Gates Band, Dallas Wayne, and most recently, The Waybacks, The Cowlicks, and of course, Houston Jones. Peter is a session drummer too, in many Bay Area recording studios, and especially for local music entrepreneur Kathi Goldmark where he has recorded with Warren Zevon, Skunk Baxter and authors Amy Tan, Steven King, and Norman Mailer.

A classically trained cellist with a degree in ethnomusicology, Chris Kee has performed and recorded with a bewildering array of artists, including Peter Rowan and Norah Jones. He is a long time collaborator with Telecaster wizard Jim Campilongo, playing with Jim in the legendary Ten Gallon Cats and various post-Cats ensembles. With drummer Peter Tucker, he was in the original rhythm section of those practitioners of acoustic mayhem, The Waybacks. In various musical incarnations, he has opened for Jerry Garcia, Lyle Lovett, Los Lobos, Bela Fleck and J.J. Cale, to name but a few.

Henry Salvia was born a dim-witted but honest child in the Cagolugo section of Detroit. As a child, he threatened his parents with becoming a drummer until he discovered that the piano was larger and heavier, so naturally he began to play it. After a long and undistinguished career performing in luxurious hotels and corner dives throughout the Metropolitan area, he decided to move to Los Angeles to expand his opportunities, and wound up in San Francisco. Several years of playing rock and Top 40 in Detroit was ideal training for his role in the Billy Band , who played both kinds of music (country and western). After being replaced by a pedal steel guitar (though no one in the Billy Band played it, it looked better on stage than Henry), he moved to a roots rock band called the Hurricanes , where he was surprised to discover his wife singing for the band. So, he married her. It seemed the honorable thing to do.

All of this experience playing rock and country made him the logical selection as the piano player for the Johnny Nocturne band, who specialize in R&B, soul, and jazz. Henry’s frenetic yet lyrical style (describe by bandleader John Firmin as “a cross between Carmen Cavallero and Cecil Taylor”) is featured on several of their albums. Henry has had the honor of working with artists such as Bo Diddley, Rickie Lee Jones, Johnny Colla (of Huey Lewis and the News), Big Jay McNeeley, Jessica Mitford, Tommy Ridgely, Al Kooper, Peter Coyote, Big Lou the Accordion Princess, Jan Fanucci, and (his favorite) Johnny Adams.