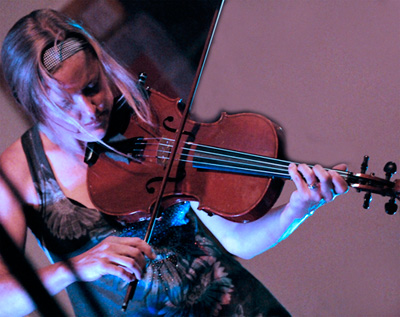 After nearly 20 years as a fiddle sideman and a singer-songwriter, playing in bluegrass, country, rock, celtic, jazz and folk ensembles, Joyce Andersen has gone into the woodshed for 2 years to create a new body of music and a new musical standard of what an unaccompanied fiddle troubadour can do. Her 5th solo CD, titled Swerve, features her new sound in 8 extended improvisational songs that embrace a dizzying range of musical styles, from jazz standards to fiddle tunes, gospel, ballads and blistering rock & roll.

Over her career Andersen has developed an uncanny ability to play violin and sing at the same time, often with the instrument and vocal in counter-rhythms, as well as complex harmony and diverging lines. Add to this an array of hi-tech gear that would make a rock star drool, and Andersen now commands a staggering wall of sound that emanates from her violin, viola, Norwegian Hardinger fiddle, and foot percussion. Without using any computerized or pre-recorded sounds, she literally dances with all four limbs as she weaves intricate rhythms, melodies, and harmonies into extraordinarliy musical sonic collages. Her new sound is built from a large palette of strummed, plucked and bowed sounds, combining and juxtaposing beautiful acoustic violin tones with swirling electro-acoustic explorations and crunching rock distortion.

Swerve marks the emergence of a unique, urgent and powerful new sound for the solo violin player, that is at once diverse, complex, and distinctively her own. It showcases her impressive musical skills and vocals as well as her composing, arranging and brilliant improvising. With her powerful voice and stage presence at the center, she runs seamlessly through traditional bluegrass songs, anthemic power ballads, Billie Holiday torch songs, and house-rocking reworkings of classics from the likes of Marvin Gaye, Big Mama Thornton, Steppenwolf, Steve Winwood and even Jimi Hendrix.

“I’ve always envied guitarists their ability to play gigs alone, and especially I have always been in awe of the expressive power of the electric guitar,” says Andersen. ” I’m excited to have found a way to make a complete solo troubadour sound with just my violin that feels right to me musically, and since violinists really haven’t gone down that road the guitarists have, I am finding my own sounds.” Guitarists have always been able to play solo, and it’s taken over two years of effort for Andersen to develop the new tools and techniques she needs to fulfill her musical vision of expanding the violin’s capabilities. Following in the footsteps of electric guitar pioneers like Hendrix, Les Paul and Michael Hedges, Andersen is sculpting a new set of sounds to add to the sonic landscape of an instrument that was considered to have been perfected 400 years ago. She says: “A vital part of my sound is that in no way am I abandoning the acoustic tone of the violin & viola in favor of an electronic replacement. Electric violinists have plugged in for decades, but they seem to have sacrificed the acoustic tone they started with. I am trying to use both sets of sounds in my music.”

Indeed, for over half a century guitarists and listeners have accepted the electronically generated sounds of echo, phasing, tremolo, delays, distortion, and even wah-wah as an extension of the sound of the guitar, and there is no reason why the violin cannot go down a similar artistic path, and be seen as expansion rather than compromise or degradation. A number of violin players are already experimenting with electro-acoustic sounds, but Joyce Andersen is taking this idea to a whole new musical level and opening a new set of doors for modern-day violin troubadours, while still remaining true to her deep roots in traditional fiddling and musical Americana.

Her music has brought her from the coffeehouses and taverns of her native New England, national & international touring with folk virtuoso (and husband) Harvey Reid, the stage of Carnegie Hall, the Conan O’Brien show and country music in Japan.

Her recorded work has won her critical acclaim and radio play in the folk world.

Sing Out! magazine says her CDs “…places her right up there with any of the songwriters out there performing their songs today.”

The Boston Globe says “That neo-traditional current is starting to be felt among the ranks of New England songwriters…among the hottest…New Hampshire fiddler-singer Joyce Andersen.”

And Minnesota Public Radio says “Youth and strength flow through her voice. She’s got power and conviction. . . She’s writing new songs and retelling old stories, and there’s” still something mysterious in her music that sounds like comes from an ancient and pure source.”