The $20.00 tickets are on sale now at the Martin Hotel, Nature’s Corner, and Global Coffee. You can also buy them online at themartinhotel.com. 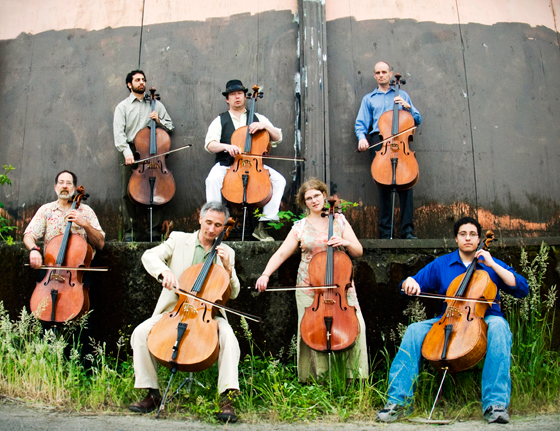 Since the group’s inception in late 2007, the Portland Cello Project (or, PCP, as their fans affectionately call them), has wowed audiences all over the country with extravagant performances, everywhere from Prairie Home Companion, to that punk rock club in the part of town your grandma warns you not to go to after dark. The group has built a reputation mixing genres and blurring musical lines and perceptions wherever they go.

No two shows are alike, with a repertoire now numbering over 800 pieces of music you wouldn’t normally hear coming out of a cello. The Cello Project’s stage setup ranges from the very simple (4-6 cellos), to the all out epic (which has included 12 cellos playing with full choirs, winds, horns, and numerous percussion players).

The Cello Project’s mission is three-fold:

The first time you see the Portland Cello Project perform you might be perplexed when you hear affectionate fans shouting “We Love PCP!”

In spite of a barrage of musical and visual sensory overload, you’ll figure out that you aren’t in a crowd of horse-tranquilizer-snorting maniacs, and that “PCP” is the tongue-in-cheek acronym of this group of classically trained cellists.

But you’ll wonder what kind of a crowd this is. In the course of one of PCP’s epic 2-3 hour shows (the format of which is always a one-time affair the group writes almost entirely new arrangements for every performance cycle) you’ll see such sights as: old ladies, straight out of the symphony hall nodding their head to cello hip-hop; young children playing air cello while dancing to 16 cellos accompanying The Builders and The Butchers; hipsters too-cool-for-school mesmerized by Arvo Paert; members of the Decemberists playing late 19th century Russian compositions transcribed for Hammond Organ, a 40-piece choir, and of course: a symphony of cellos.

Since the group’s inception in late 2007, they have performed with a veritable “Who’s Who?” list of Portland musicians, from Laura Gibson to The Dandy Warhols, Horse Feathers, Mirah and Loch Lomond, just to name a few.

The cello is more-or-less the only constant in this amorphous collective from Portland, Oregon. Yet there is an organizer holding this anarchic display of controlled chaos together. You’ll see him sitting in the back row of the cello section at all of these shows, as if to appear an anonymous member of the horde. This is Douglas Jenkins. Jenkins, who often pens15-20 new scores for each performance, has led the band through two previous CD’s of original songs and covers, and has been at the heart of the band’s rise to immense popularity in their hometown.

The group’s newest full-length is being released on June 9th, 2009 on their new label, local independent Kill Rock Stars. This CD and indeed the relationship forged with this well-suited record label embodies the group’s belief that “collaboration is the cornerstone of independence and artistic freedom.” Two of the artists who have collaborated with PCP: Thao Nguyen of Thao With The Get Down Stay Down and local musician Justin Power, contribute four songs each to this CD, the Thao and Justin Power Sessions. And the other four songs on the record are strategically placed examples of cello sublimity and madness: from a Pantera cover, to a solemn religious piece by John Tavener.

Although it’s no longer an anomaly for popular musicians to work with an orchestra, it tends to be on the symphony’s terms, in the symphony’s concert halls, and for the symphony’s exclusive rates. The classically trained cellists of The Portland Cello Project are working to reverse that tradition by making their talents accessible to their guests wildest dreams, while bringing the instrument into venues where you wouldn’t normally see cellos.