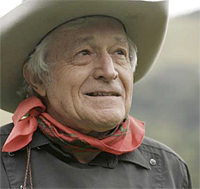 Ramblin’ Jack Elliott is returning to the Martin Hotel for a Great Basin Arts and Entertainment produced concert at 7:00 PM, Tuesday, January 25. Jack played the Martin just one year ago, on his way to Hollywood to pick up his Grammy Award.

This year he is returning, on his way to the National Cowboy Poetry Gathering in Elko, but he is bringing along two of the best sidemen in the business so he can perform some of the songs from his Grammy Award winning record. Van Dyke Parks will accompany Jack on the piano, and David Piltch will play standup bass as Ramblin’ Jack performs some of the classic blues tunes that formed the theme for his latest recording.

“Nobody I know—and I mean nobody—has covered more ground and made more friends and sung more songs than the fellow you’re about to meet right now. He’s got a song and a friend for every mile behind him. Say hello to my good buddy, Ramblin’ Jack Elliott.”
– Johnny Cash, The Johnny Cash Television Show, 1969.

At seventy-nine, Ramblin’ Jack is still on the road, still seeking those people, places, songs and stories that are hand-crafted, wreaking of wood and canvas, cowhide and forged metal. You’ll find him in the sleek lines of a long haul semi-truck, in the rigging of an old sailing ship, in the smell of a fine leather saddle.

BETTER YET, FIND HIM AT THE MARTIN HOTEL IN WINNEMUCCA ON JANUARY 25.

Guy and Pipp Gillette, from their home in Crockett Texas, are once again on their way to a series of appearances in California, and they will make a stop for a show in Winnemucca on August 7.

Guy and Pipp appeared at a sold out show in Winnemucca last December, and they were a huge hit.  They perform a mix of traditional cowboy songs, and songs reflecting the Celtic roots, country blues, minstrel and medicine show songs that influenced cowboy music. For me it is always worth the price of admission just to watch and hear Guy play the rhythm bones, musical bones they make from cow ribs. 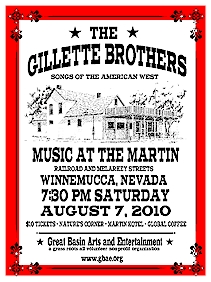