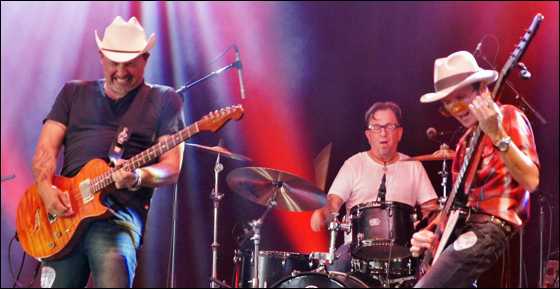 If Tim “Too Slim” Langford only played slide guitar, he would slither around most other blues guitarists and put a ferocious bite on their pride. However, as the sole six-string slinger, songwriter and lead singer of the power trio Too Slim and the Taildraggers, he is a total force of nature when using his home studio equipment for the concerts.

In 2014, Too Slim and the Taildraggers released “Anthology”, recorded in Nashville with Producer Tom Hambridge click to learn more about this production.  Anthology was chosen as the #1 Album of the Year by the Blues Matters Writers poll in the UK, and was #4 on the 2014 Roots Music Report Top Radio play for 2014. Too Slim and the Taildraggers 2013 release “Blue Heart” rose to #3 on Billboards Top Blues Album Chart in 2013 and was nominated for Blue/Rock Album of the Year in 2014 at the Blues Blast Music Awards.

In 2012, Tim Too Slim Langford relocated from Seattle to Nashville Tennessee. Too Slim is backed by the some of the best musicians Nashville has to offer, Eric Hanson on Bass and Jeff “Shakey” Fowlkes on Drums/Vocals.