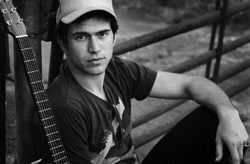 David Jacob-Strain is a striking slide guitar player and song poet from Eugene, Oregon. His deep love of blues and roots music is evident in every one of the songs he writes. He studied masters like Robert Johnson, Taj Mahal and Jackson Browne, but plays his own sound, his own song, with a virtuosity that is uniquely his. David began playing on street corners and at farmers markets as a teenager, and bought his first steel guitar with the quarters he saved up.  Before he dropped out of Stanford to play full time, he had already appeared at festivals across the country, often billed as a blues prodigy, but he had to fight to avoid being a novelty act:  “I wanted to tell new stories, it just wasn’t enough to relive the feelings in other people’s music.”